Those of us with sensitive skin often find that we are sensitive in other ways as well, that can make daily living a real challenge!  I've had quite a journey with this, especially in recent years, and as a result I've learned some important survival strategies.  These are some of the resources and supports that have helped me.

Around 2007 I began developing mysterious sensitivities and allergies after a traumatic injury.  First, I became allergic to my wedding ring.  (Later I discovered this is likely a nickel allergy).  Later I developed sensitivity to smoke, and eventually I developed a fragrance allergy.

In 2014 the chemical sensitivity got much worse after a small mold remediation project in my home.  Although the project was done using no toxic chemicals, to the best of my knowledge, I began reacting to materials already in the house such as wallpaper adhesive which offgassed after the wallpaper was removed.   This led to a crisis of being unable to live in the house ... yikes!

Here are the resources that have been most helpful to me during this ordeal:

The Dynamic Neural Retraining System - This is the program that helped me move back into the house after living in the tent for 4 months. It is a new paradigm in healing for chemical sensitivity and other related challenges.  People with chronic fatigue and other mysterious sensitivities have also benefited, and they have an incredible success rate.  Many people see improvements or complete recovery.    I started the program in June of 2014 and attended the live training in August 2014.  I am happy to report that I am much better now, you can read my story here.

I Can Breathe masks - these have been a lifesaver, allowing me to be in the house even with some offgassing still going on.  For chemical problems their Organic Cotton Bamboo Filter Mask is the most effective and least irritating.  I've also used their Carbon Filter Mask, also very effective but less comfortable if you need to wear it for a long time.

AFM Zero VOC Paints, Sealants, Caulks and Primers - These are excellent and non-irritating, I had these shipped to me from a local store, and I found some of the products including the caulk and adhesive on Amazon.

Airpura Air Purifiers - I did extensive research in order to find an air purifier that does a good job and does not offgas toxic chemicals.   I've been really pleased with the Airpura which contains no toxic chemicals.  It works really well and the only downside I found to the Airpura is that the unit is quite heavy, and changing filters is a bit awkward.

They offer the same basic unit with different filters.  I originally purchased the all purpose model, the Airpura R600 which worked really well until the wallpaper was removed and the room began offgassing.  I upgraded the filters to the Airpura V600 which has helped remove some of the chemical smell.

Carbon Blankets  - Some nights I couldn't sleep in the tent, when the thunderstorms were so intense that the tent leaked and soaked everything, or when the frogs were so loud that I simply could not sleep!

Then, I had to find a place to sleep indoors, and I found a couch in our basement that was old, but far away from the chemicals in the upstairs. The couch had some chemical smells that were difficult but I discovered that if I placed a carbon blanket over it, that I no longer was inhaling the chemicals from the couch.  I purchased one from Daliya at NonToxic.com

She also recommended using Myalar blankets which are inexpensive and can be used to cover up an offgassing piece of furniture.  They are loud and crinkly so not the best choice for over a mattress, but good for a temporary solution.

Zeolite -  This was my newest discovery that works amazingly well for removing chemical odors from clothing.  I also used it on my carpet by applying it, letting it sit overnight and them vacuuming.    I definitely noticed that it removed a lot of the chemical offgassing.  I used a finer zeolite powder for laundry and a granulated form for the carpets.

I noticed that when I lived in rural Brazil, away from most electricity, I felt great!  When I returned to the United States, I noticed myself feeling more fatigued and less vibrant again.

I am one of the few people that feels SO much better during a power outage!   This has become more of a challenge recently and so I ended up doing some research about this problem.  Some people call it EMF sensitivity or Electromagnetic Hypersensitivity Syndrome or EHS.

It's a bit of a mystery to me as there hasn't been a lot of scientific or medical understanding about this condition  yet, however more and more people are having problems now since the advent of Wifi and the growing number of cellular data towers.

I researched and researched to find some kind of a simple solution that didn't require me to give up my computer, put strange electromagnetic shielding materials all throughout my home, or move into the middle of the desert!

By far the most dramatic results came for me with the  Earthcalm products.   I felt an immediate relief as soon as I plugged the unit into my home.  It got better and better as I gradually transitioned to the full strength home unit (they recommend a three step process to acclimate).

I felt such a huge increase in my energy level that I ordered all their other products, including the personal pendant and the products for the car, cell phones and computer.  My results - I have significantly more energy and sleep better, I feel less frazzled and can think more clearly,  I can still use my computer and cell phone ... and traveling is easier because I take the EMF protection with me.   Here a photo of my Earthcalm home EMF protection system... 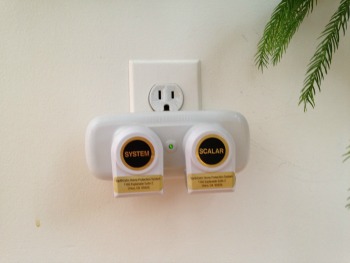 Earthcalm keeps updating their technology,  and so the new home EMF protection system has a different look now and is even more effective.   They offer upgrades for those of us with older systems.

I appreciate this, as there is an ongoing increase in the use of wireless technologies that can be challenging for those of us that are sensitive to electrical fields.  You can visit the Earthcalm website to learn more.

Dr. Elaine Aron discovered that 15 to 20% of the population processes sensory information differently.  The wrote a book called The Highly Sensitive Person and has since then developed a whole body of work to address the unique challenges faced by those who are very sensitive.  I took her self test Are You Highly Sensitive and checked "yes" to all but two of the questions!