It may not be pleasant, and it sure isn't pretty, but knowing what causes boils could be very useful information to anyone who has to deal with them, even if it's just a one-time thing.

Just as bad things can happen to good people, just about anyone can develop a boil, and the timing is usually the absolute worst!

Knowledge is your best choice for doing everything you can treat them when they show up, or to prevent them from occurring in the first place.

The root cause of a boil is a "bug", most frequently the staphylococcus aureus and its relatives, including that bad boy, MRSA.

These bacteria are usually hanging around on the skin or in the nose of a sizeable segment of the population, just waiting for the opportunity to invade. If you get a break in the skin-a tiny cut, a splinter, or an ingrown hair-they have found their opportunity. 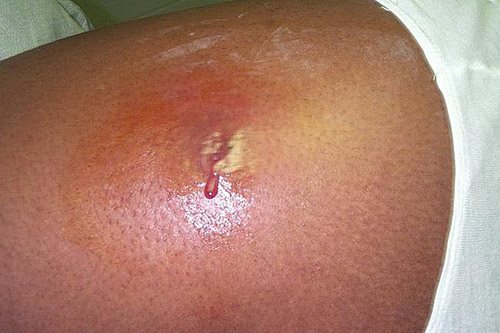 Once they have their opening, the bacteria settle into a hair follicle or an oil gland, and begin to reproduce. At this point you may notice a tender inflamed area. They try to be sneaky, but once they start growing, your body's immune system senses danger, goes on red alert, and sends out the infection-fighting cavalry.

As the battle against the infection progresses, the boil actually becomes larger, more painful, and filled with pus. Eventually, the boil will open, allowing the pus to drain and dry out, and the healing process will be complete. From start to finish may take anywhere from 10 to 25 days, unless you or a health provider decide to help it along.

Knowing what causes boils is just the beginning of understanding why some people tend to get them while others don't. There are certain conditions that may predict whether a particular person will have to deal with boils. If you have uncontrolled diabetes, a compromised immune system, inadequate nutrition, or other types of infections; you may find that you frequently suffer from more than your share of boils.

An emerging new school of thought presents another possibility for what causes boils: toxicity within the body. When the body's systems can't eliminate waste products and impurities in the normal ways, through the bowel and kidneys, it resorts to Plan B, taking it out through the skin and the lungs. When this happens, it's a pretty good sign that there's something wrong somewhere in your body.

If you infer from this information that it may be necessary to involve your entire body in your battle of the boil, you're getting the big picture. Things such as diet and exercise, bathroom habits, other medical conditions or medications, and levels of stress all come into play if you want to prevent boils.

Diet is one of the most essential components of health at the cellular level. By not eating properly, you are neglecting to provide your body with the proper nutrients required for a healthy functioning body. And if you're eating a diet with insufficient fiber, you're encouraging sluggishness in your digestive system, which can lead to impurities circulating inside your body instead of being eliminated as they should be.

Stress is another consideration in keeping the whole body strong enough to fend off boils. Although stress is a normal part of life, too much unmanaged stress is detrimental to all of your bodily systems. When the systems don't work, the boils don't stay away.

Stress affects your chances of developing boils in a different way, as well. When you're under stress, you often tend to skip some of your hygiene requirements-it's just one more thing on your already-crammed plate, and you don't want to deal with it. If you become hit-and-miss with your cleanliness, you're running the risk of carrying greater numbers of potentially boil-producing bacteria on your skin.

So far, we've covered the subject of boils from mostly a Western medical perspective, but you may wonder if practitioners of alternative approaches have a different outlook on what causes boils.

From an Ayurvedic point of view, boils develop in the same way as described above, but the cause is actually a disruption in the body's humors, principally Pitta, or fire.

When the body's internal heat becomes out-of-kilter due to the wrong kind of food, too much sun or heat, bottled-up emotions, or stress, you are opening yourself up for a number of health problems, including boils.

The Ayurvedic way of bringing the body back into balance involves natural, holistic treatment of the boils while bringing the rest of your life back into harmony by taking out the bad stuff and adding more of the good stuff.

Traditional Chinese Medicine takes a similar approach when dealing with what causes boils. This discipline also observes five elements in the body that correspond with elements in nature. In addition, there are Yin and Yang to symbolize balance. When that balance is corrupted, the body's systems become weaker and the possibility for disease becomes stronger.

To illustrate this idea, even diseases are classified as being Yin or Yang. To maintain proper balance, a person with a Yang disease should avoid eating Yang food, or the lack of balance will mean a poor chance of recovery. The same idea holds true for a person with a Yin disease avoiding Yin food.

One final aspect of Chinese medicine involves the meridians of the body, which channel the body's vital life force, called chi or qi. According to Chinese medical thought, blockages can occur within the meridians, preventing the chi from moving freely through the meridians. A blocked chi is thought to be responsible for causing disease symptoms, including boils, and acupuncture or acupressure is applied to manipulate the chi.

A Meeting of Ideologies

Even in our Western culture, many people recognize that there may be more than one answer to the question of what causes boils. For anyone who suffers from this painful, embarrassing, and potentially dangerous skin disorder, having the opportunity to explore a world-literally-of different options means having more options for healing.